Prime Time Crime
Monday, January 30, 2023
Home Crime & Punishment Spin City
I’m trying not to get too excited about the prospect of a Conservative government. And in this last week of the campaign I have to admit I am harboring more than a little trepidation that something very weird is going to happen to derail the momentum the Tories seem to be gaining.
In the dying days of the campaign PM Paul Martin is still relying on the “Harper is scary” message that proved so successful in the last campaign. But that is so 2004. And as the polls are showing, this is not.
NDP leader Jack Layton is still barking about tax cuts to “banks and oil companies” as though there aren’t any other idustries out there who employ people and are chaffing under the tax burdens levied by the Liberals to provide the dollars they can steal.
Today, Paul Martin was in Vancouver appearing before the Board of Trade ostensibly to talk about about crime, an issue resonating with most voters. But no, crime wasn’t on his radar screen. He went on about if Harper is elected then he will cut the precious social programs the Libs seem to think are precious to Canadians.
Really.
From a personal point of view I’d look forward to any government, Conservative or otherwise, that would rid this country of nonsense programs liked the gun registry and state mandated indoctrination centres. . . .sorry, day care facilities.
And don’t get me started on the moribund health care system that even the Supreme Court has recognized as flawed. 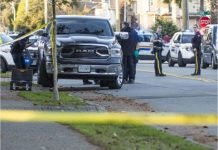