On May 16th, 2016, the Independent Investigations Office released a media announcement saying they had cleared the Transit Police officer engaged in fatally shooting a knife-wielding man in the Safeway in Whalley, BC which occurred on Dec. 28, 2014. What could possibly have taken so long in what was, by all accounts, a cut and dried police use of force?

Yes, there were a lot of witnesses, but this should make the job easier. Additionally, there was CCTV footage that allowed the IIO to track the armed suspect’s movements throughout the store and, as well, the police movements from start to finish.

Both officers gave clear statements to IIO investigators which was corroborated by civilian witnesses, forensic evidence and CCTV footage. What does it take for Richard Rosenthal to accept that the police acted appropriately? What could possibly take so long? This should have been done and dusted in weeks not 16 months.

The problem is that Rosenthal, the Chief Civilian Director, believes his role is to gather evidence to prosecute police, not to find the truth.

On the heels of this, on May 20th, the IIO announced they were conducting a review of their own investigation into the shooting of an armed suspect at the Starlight Casino in November, 2012. This investigation led to the charge of second degree murder against Delta Police Constable Jordan McWilliams, of which much has been written in this space. The charge was stayed last summer nearly 3 years after the incident. It should have never been laid in the first instance.

This is ironic isn’t it? The IIO was formed because the government believed that the police shouldn’t investigate themselves. Yet, somehow we are supposed to trust the IIO to investigate themselves when their deeply-flawed investigation resulted in a charge against a police officer doing his duty and doing so courageously.

On Monday, the IIO responded to another police shooting, this one in Vancouver. Again, a knife-wielding suspect, clearly disturbed and clearly dangerous. And again, this appears to be a cut and dried use of force incident. But, given the IIO’s performance history they will likely drag this out for months and months.

At midday, a visitor from Edmonton, Bill Whatcott, was in Vancouver visiting his dad. He walked out of the McDonald’s at Hastings and Cassiar in east Vancouver. He noticed a car fire and two female VPD officers in the parking lot. He didn’t think too much of it but took a photo of it anyway. Here’s the photo: 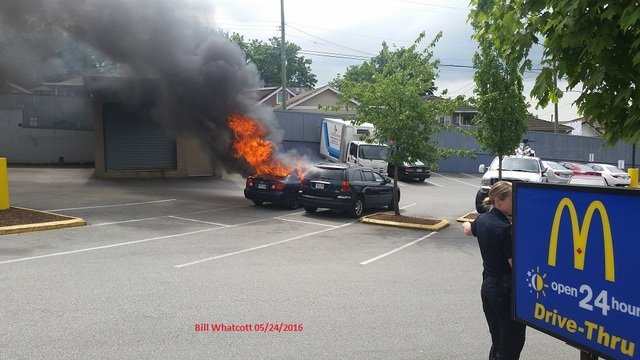 As he was taking photos of the fire, a man suddenly appeared on the scene. Here’s the next photo. You can seen the man has what appears to be self-inflicted wounds to his abdomen and a knife clenched in his fist. 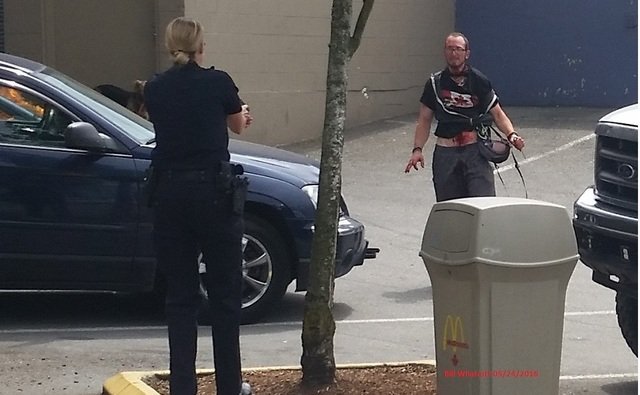 The officer sees the knife and draws her weapon. The suspect then charges at the officer wielding the knife. This photo shows the moment before the shot was fired. Whatcott described it as a “death charge.” If you note the officer’s position in the above photo then in this one, it’s clear she was backing away from the man as he charged. 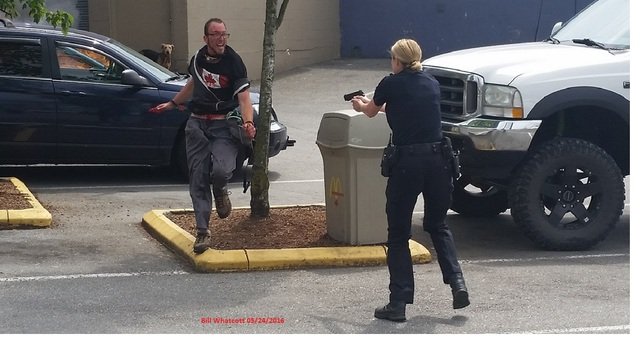 The officer fired a single shot which took down the suspect.

Here you see the officer holding her weapon on the downed suspect, maintaining a distance and yelling at him to stay down as her partner comes to assist. You can see the car fire still burning in the background. 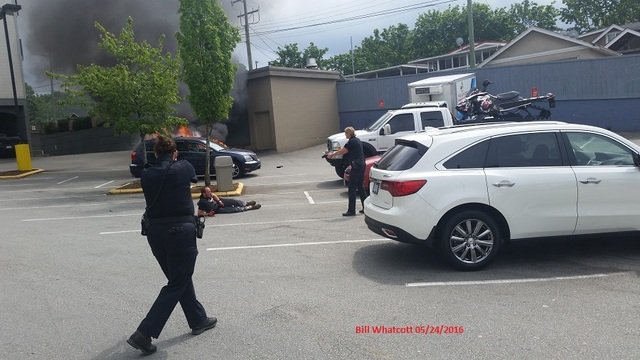 Finally, other officers arrive along with paramedics and begin medical treatment. 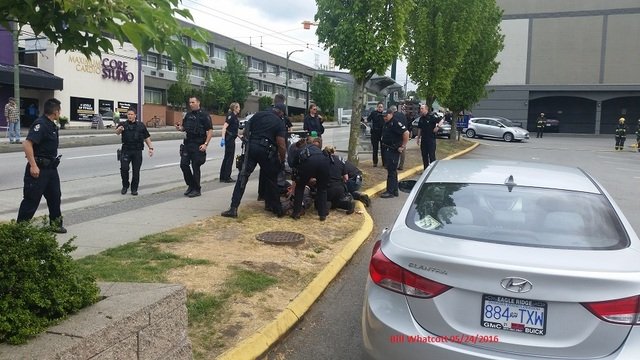 The man was taken to hospital with gunshot and stabbing injuries, the latter presumably self-inflicted and the police continue to investigate the incident. VPD later said the burning car was associated with the suspect.

This appears to be as clean an officer involved shooting as you will see. Yet, the IIO will do what they do in their bubble to try and figure out what the officer did wrong to try and bring some sort of prosecution.

Whatcott posted online after the incident saying, “Anyways, please pray for the officer and subject involved. I found this was traumatic for me. How much worse for them……”

Indeed. And how much more traumatic is it for the officer involved to have something like this hang over her head for months and months wondering if the IIO will fabricate something for which she may be charged criminally?

I don’t have a problem with civilian oversight of the police. I do have a problem with the philosophy of the IIO as it is constituted. Rosenthal looks at things 16 days to Sunday trying to figure out if something an officer has done is an offence against any statute not just the criminal code or the Police Act. What the IIO should be doing is looking for the truth and whether police actions were appropriate or not, considering all the circumstances and in doing so, conduct a competent and timely investigation. If, in the process, evidence emerges that an officer used excessive force, then so be it, bring a charge. Every police officer is authorized to use force in the execution of their duty, but is criminally responsible for any excess thereof. Emphasis on excess.

As a former homicide investigator said to me on this one, “I could do this file from my sofa.”  Yet this will take the IIO months and months. And given their history thus far, neither the public nor the police should have any confidence it will be either competent or timely.

More than a million march in Hong Kong protesting extradition and... 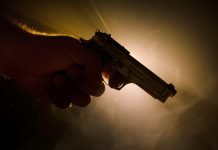 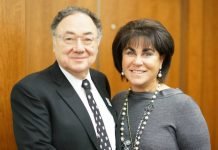 The President is missing