Prime Time Crime
Saturday, January 28, 2023
Home Crime & Punishment No time for boasting
In the days just before Christmas, Toronto Police Chief Bill Blair made headlines (Blair boasts victory over city gun crime – National Post, Dec. 21, 2006) by claiming that his force had achieved a victory in the battle against gun crime. Blair cited rapid response unit tactics as the primary reason that unrelated homicides were down nearly half from the record setting year, 2005. He also brought with him stats that showed the number of shooting occurrences were down from 237 to 198 and the total number of shooting victims were also down from 321 to 276.
He boasted that the Toronto successes were being studied by other police forces seeking to achieve similar results.
Unfortunately, less than 48 hours later, headlines screamed (Guns blaze across city ) that Blair may have been a little premature in his pronouncements. A day before Christmas, in a 24 hour period, one man was shot dead in a dispute and six others were wounded, including two innocent passers-by, in separate incidents.
To be sure, Toronto has improved in 2006 over the previous year that culminated with the Boxing Day gun battle in a downtown mall that resulted in the death of 15 year old Jane Creba.
But realistically, the numbers have declined this year to more traditional levels and seem to show that while in 2005 there was certainly a spike in handgun violence, the problem is far from being solved.
I take no issue with a Chief wishing to do a little personal horn-blowing when things are showing an improvement. But, realistically, things are so bad in Toronto that some housing projects are virtual “no go” areas for anyone who isn’t armed to the teeth, and, I include the police in that statement. There are neighbourhoods where Jamaican gangs seem to operate with impunity as family after family mourn the loss of loved ones to the violence that underlines the drug trade.
As an example, check out this video called “Firewar” that was posted to Youtube on Dec 17, 2006. This is a neighbourhood, Jane-Finch, that is out of control and bordering on anarchy. Note the gangsta’ chatter as the two sides battle each other with fireworks and bottle rockets. Note also the size and age of some of the participants. Then, picture them a couple of years older with guns in their hands. Then note how long the “battle” goes on and nowhere do we see the police. Why? Largely, I would bet, because no one who lives in that complex would bother to call them. And that speaks volumes.
Bear in mind, that this video is linked on a community web site that ostensibly extols the virtues of their neighbourhood. Some virtue.
There are over 70 identified street gangs in Toronto, the majority of which are comprised of black, inner-city youth that no one seems to want to talk about, succumbing to political correctness. And that statement doesn’t even deal with the other aspects of organized crime such as outlaw motorcycle gangs like the Hells Angels, the firmly established Mafia or the Asian organized crime groups that are very prevalent throughout South Western Ontario.
I think, if I were Chief Blair, that I would be very subdued and measured when talking about gun and gang activity in Toronto. At best, Toronto police are barely keeping their head above water. At worst, they are gradually losing control of that city. I wouldn’t be boasting.
Leo Knight
leo@primetimecrime.com
Share on Facebook Share
Share on Twitter Tweet
Share on Google Plus Share
Share on Pinterest Share
Share on Reddit Share
Read Full Article

IHIT called in for overnight shooting in Surrey

Mom killed by stray bullet in her bedroom in Queens, NYC

Bikers come from near and far for funeral of BC Hells... 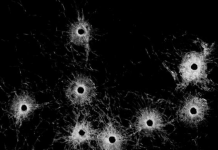 One dead, four wounded as bullets fly across Toronto