As I write this, I am sitting on a flight to the Centre of the Universe contemplating what tomorrow may bring in my home city of Vancouver as it “Welcomes the World” in the Opening Ceremony of the 2010 Winter Olympic Games. Whatever concerns or complaints I have had with VANOC, I am a supporter of the Games and truly expect and hope that Vancouver will show itself to the world for the extraordinary place it is.

As the Games draw nearer, the rhetoric from the usual suspects of left-wing loonies ramps up.  The so-called Olympic Resistance Network is planning to try and disrupt the torch run into the Stadium and the Opening Ceremonies themselves.  They have said that any violence will be the fault of the police.

Stuff and nonsense of course.  But their bovine scatology has been duly reported by the mainstream media (MSM) with nary a critical analysis.

I mean, really! They are going to try and disrupt the Opening Ceremony of the Olympic Games and the police are supposed to stand back and let them do their thing?  Give me a break.  There will be a clash if they try and do this.  That clash will be painted as the fault of the RCMP without a doubt. And it is obscene that the MSM will allow that.

Let’s be clear, the faces of this protest nonsense, Alissa Westergard-Thorpe and her albino cohort Garth Mullins, are loudmouth, attention seeking ideologues from as far in the left field as one can be without being in foul territory.  And this isn’t really about the Olympics or anything like that. Mullins and his sycophants actually believe that the likes of Noam Chomsky and Naomi Klein are correct with their globalization and anti-capitalist rhetoric.

Mullins and Co., first came to a questionable prominence after the APEC conference of 1997 when they caused the fracas with the RCMP that for which, for some inexplicable reason, the Mounties are still being blamed.  For those of you that have forgotten or drank the MSM’s bathwater, the anarchists and anti-capitalists, represented by these two, attacked the RCMP lines ostensibly because they tried to “execute” a so-called citizen’s arrest warrant for then Indonesian President Suharto, one of the many leaders in Vancouver for the APEC conference.  Yes, the RCMP used pepper spray to stop the anarchists.  And that is just exactly what they were supposed to do.  Oddly enough, their alternative was to use batons and bullets since Tasers weren’t in wide-spread deployment back then.  But this logical argument gets lost in the noise of the left.

They knew full well their stage-managed attempt would be stopped by the police and they milked it for every drop of publicity and set the table for civil rights lawyer Cameron Ward to launch his political, er, sorry, legal career defending all manner of left-wing loons under the guise of protecting civil rights whilst bleating to a pliant media of the like-minded.

Westergard-Thorpe is described in the media as a student at UBC.  Well, she may well be, but she was described the same way post-APEC 13 years ago.  This may well be the longest degree to complete in history.  Or, she is just plain stupid, which, I suppose, is a reasonable argument considering the socialist tripe she continually spouts.

It remains to be seen what nonsense they will try tomorrow with the Torch Run and the Opening Ceremonies.  But, what is clear is that their attempt will not succeed in any manner in terms of disruption.  And they know this.  They know that their actions will be met by the police who will stop them from their ridiculous, stated aims.  And every arrest the police have to make, every punch they will be forced to throw or deployment of OC spray or tear gas utilized to defend the Olympic Games will be trumpeted in the MSM as another example of the police being out of control, and trouble in the RCMP and blah, blah, blah.

I hope the left-wing nut-cases like Mullins and Westergard-Thorpe are marginalized in their ridiculously stupid protests.  But I fear they won’t be.  The RCMP are in the sights of the MSM and I fear they will bear the brunt of the criticism regardless of the fact they will be simply trying to do their duty. 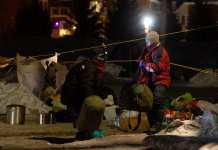 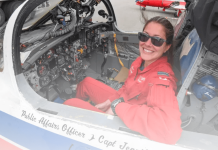 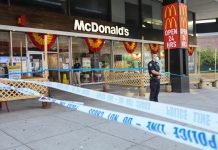