Prime Time Crime
Monday, November 28, 2022
Home Crime & Punishment Immigration decision a mystery
It’s difficult to try and be respectful of the Canadian justice system when you get decisions such as the one rendered by Immigration adjudicator Daphne Shaw Dyck in the case of Jose Franciso Cardoza Quinteros, an admitted killer and member of the notoriously violent Latino gang Mara Salvatrucha or more commonly known as MS 13.

But then, I have come to expect so very little of a system designed to be overseen by people with little or no training for the role they are performing. For most, it seems the only qualification is to have connections to whatever political party is in power and makes the appointments.

Now, I don’t know the adjudicator with the double-barrelled family name. And, it may well be that from time to time she gets it right. But then, even a stopped clock is right twice a day.
What I can and will say is that she is so wrong in this case that one has to question her competence to sit in judgement of immigration claims. When a waste of oxygen like this has already admitted to being a member of MS 13 and a participant in gangland murders, I sincerely question her ability to process information presented.
How she came to the conclusion that this lothesome individial was likely not a gang banger because, well, I have no idea. She had no evidence before her that said this goof was anything but what he said he was.
The real problem here is not that this adjudicator went off the reservation in this case, but rather that there are so many of these ‘appointees’ in similar positions of power to put at risk the rest of society in Canada. And there is precious little we can do about it.

It seems that Pierre Trudeau’s so called “Just Society” is really anything but.

39 shot, 4 fatally so far this weekend in Chicago 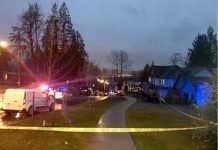