I have always taken a more Libertarian view of politics.  For the record, I believe in less government coupled with the strong enforcement of the laws of right and wrong.

As an example, Vancouver is wrestling with a spike in gun violence and an apparent gang war with the daily shootings in the most public of places like shopping mall parking lots.  As the politicians wring their hands trying to figure out what to do about it, they come up with empty public announcements about the addition of 168 more police officers and hiring up to ten prosecutors to work directly with police in the investigation of organized crime groups.

Considering it takes a minimum of one year to hire and train a police officer who is then deployable, that man or woman, on day one, has exactly zero experience as a police officer, it remains to be seen exactly how the announcement by BC Premier Gordon Campbell with have one iota of effect on the reality of the bullets flying today in the Greater Vancouver area.

Equally, while I would never argue against the idea of having dedicated prosecutors working with law enforcement in organized crime investigations, the addition of ten will take more than a little time to find, hire, train and then be functionally able to advise the police involved in complex investigations.

And, for the record, while this ‘problem’ has only recently captured the public interest, regular readers will note that in the waning days of 1999, I wrote a column saying that organized crime was the biggest threat to this country in the 21st Century.  Yes, that was in the idyllic days pre-9/11, but the threat remains no less so even with the so-called War on Terror.

Yet, for some reason, the rising body count in Vancouver, Toronto, Calgary and Edmonton seems to have suddenly become a major issue with the mainstream media and the politicians seeking ways to shut them up lest the voting public notice the bullet casings alongside the rising body count.

Well, I am glad they finally noticed, but really, isn’t it a little late in the game?  Ah well, better late than never I suppose.

But then, Campbell and his Attorney General Wally Oppal have spent the last week crowing about the need to lobby the federal government to tighten gun control laws.  Huh?  Gun control laws in this country are already ridiculously strict.   While I, as a law abiding citizen may technically own a gun as long as I have had a course, acquired an FAC and done everything in my power to ensure that the bullets and the gun never contact each other, the reality is that it is extremely difficult and arduous to actually acquire one.

But if a criminal involved in organized crime wants a gun, it is as easy to get one as making a phone call or two and having a few hundred spare dollars.  No firearms course required.

If that same criminal commits an offence with a firearm, such as sticking up the local corner grocery corner store, shooting at a rival or threatening someone in a nightclub, the law says that he or she should get a minimum of four years tacked onto whatever sentence the court hands down for the original offence.

Does this happen?  Uh, no.  The ‘use of a firearm in the commission of an offence’ charge recommended by police is bargained away so often and so fast that it is simply assumed by the defense that the offender will not have to deal with it.

So, what is more effective, Wally Oppal espousing the virtues of more police, more prosecutors and lobbying the federal government for stricter gun laws, or simply telling the prosecutors who work for him not to plea bargain away the mandatory minimum on gun crime?

There is absolutely no need for further government control on firearms.  There is a need for enforcement of the rules as they apply and the support of the Crown and the courts in the application of those laws.

The IIO is struggling to be relevant 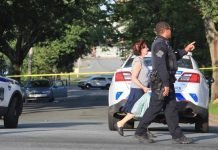 Reality at odds with picture being painted