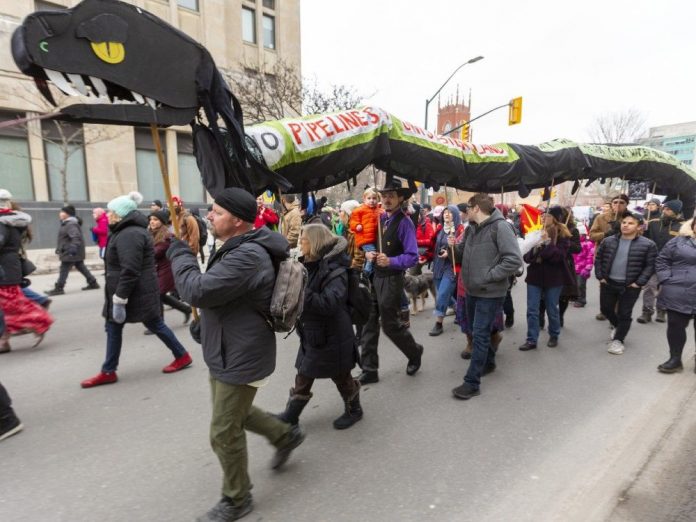 The Natural Gas Pipeline slated for Northern British Columbia has been debated, consulted, and litigated to death.  The pipeline has been agreed to by the legitimate elected Chiefs of most of the bands in the area and will provide thousands of jobs for natives and a huge economic boost to the entire region.  The courts have ruled that while natives must be consulted on any projects that may have any effect on ‘unceded’ land, that requirement doesn’t give them a veto if things don’t go their way.  At least that’s the theory.

The reality has turned out to be quite different as the objections of five ‘Hereditary Chiefs’ (= unelected, just there) have sparked protests, occupations and blockades of highways, major intersections, and railways across the country.  All the usual suspects in the usual perpetual stage of hysterical rage and shouting all of the latest SJW buzzwords.

So far the police have done nothing.  Well, ‘nothing’ isn’t quite accurate.  They did take action at an illegal highway blockade near Courtenay, on Vancouver Island, a few days ago but it wasn’t quite what most expected.

Let me be clear, people have a right to protest and the police in this country bend over backwards to uphold that right.  But, as I’ve said in the past, no right in the Charter is absolute.  The right to free speech doesn’t allow you to shout ‘fire’ in a crowded theatre or to threaten or slander someone.  Protests must be peaceful and they must be lawful.  Beyond inconveniencing motorists, blocking major intersections creates dangers that can’t be overstated.  In addition to the intersection itself there is a telescoping effect that creates gridlock for miles.  Trying to get ambulances or police cars, much less fire trucks though that is absolutely impossible.  However righteous you believe your cause to be, taking actions that could endanger lives and public safety is the height of selfishness and irresponsibility.  Naturally, people caught up in this or watching it on the news are asking why the police aren’t taking action and rightfully so.

This is not the fault of the police.   The problem is a lack of support.  Without a court injunction which orders the police to act and provides consequences, making arrests is a waste of time and Chief Palmer knows it.  Six days ago the Port of Vancouver obtained an injunction forbidding the protesters from blocking access to the Port and the VPD went in immediately and arrested 57 people who refused to leave.  The VPD won’t hesitate to do what’s required but absent an injunction, they come up against the following section of the Crown Counsel Policy Manual.

Use of Charges under the Criminal Code

Acts of civil disobedience, including conduct involving public demonstrations, may come into conflict with the law and obstruct or interfere with the rights of others. The use of criminal sanctions in these situations may not always be in the public interest. Factors that favour prosecution may include: • the conduct involves violence resulting in physical harm or assaults with a reasonable apprehension of physical harm

• an assault on a peace officer has occurred

• the circumstances are such that the public interest clearly requires a prosecution, for instance, where the safety of emergency personnel, police or other persons is jeopardized

When Crown Counsel are consulted, they should encourage the police to exercise discretion in selecting an appropriate response for each case based on its unique facts, while ensuring that the general public is not unduly inconvenienced.

The final bullet point describes the current situation to a T.

Like most, I never knew this policy existed until I was called to the Indian Affairs Office in a downtown office building during my 6 months as a Patrol NCO in the West End in the early 90s.  About 15 or 20 activists had entered and occupied the offices during business hours and were arrested for Assault By Trespasser when they refused to leave.  Each went limp and had to be carried to the elevators then out of the building and placed in wagons.  Whatever ills had beset these people and formed their endless list of grievances, lack of nutrition was not among them because most of them weighed a ton.

Hours were then spent getting these people booked and completing Crown Counsel reports only have them ‘no charged’ because Crown policy is not to charge in cases of civil disobedience and a prosecutor told me this verbally over the phone the next day.  I asked if we could consult with Crown over the phone in the future in order to determine our course of action but was told no, and that we would have to go through the whole process and submit complete Reports to Crown Counsel and they would then decide.  When the press asked the Crown about this they were told that each case is considered on its own merits and charges could be laid if the circumstances warranted.   Right.  The message to law enforcement couldn’t be clearer.

Support from our political leaders?  Don’t make me laugh.  The Minister of Indigenous Affairs spent 8 hours out in the cold in Ontario talking to these ‘Land Defenders’ (= Thugs.  Brandishing the same Six Nations flag they used at Caledonia where the police really abandoned the townspeople).

He then said he’s taking a message from them to the Prime Minister and I’d imagine it’s the same message most of us would have for the current Prime Minister on any given day.  Both BC Premier Horgan and Trudeau took pains to point out that politicians don’t direct the police (each reading from the same script) setting it up so they can disavow any action the police take or don’t take, as the case may be.  Either way they lay it off on the cops, don’t offend their Lefty base, and keep their own skirts clean.  Vancouver Mayor Kennedy Stewart says protests are a part of life in the big city so suck it up because Vancouver is a ‘city of reconciliation’.  His Honor either doesn’t realize or won’t admit that, to The Land Defenders, ‘reconciliation’ doesn’t mean what he thinks it does.  Spineless weasels the whole works of them.  So far the only politicians who’ve displayed any courage were Mayor Brad West of Port Coquitlam and Public Safety Minister Mike Farnworth who both condemned the blockades and the effect they were having on working people.  Mayor West also observed that ‘if you or I tried this we’d be in jail’.

Meanwhile, the nation’s economy is being held hostage.  In addition to traffic gridlock the railway blockades are starting to create shortages of consumer goods.  Out here on the coast the it’s pretty mild but the rest of the country is in the midst of their usual deep-freeze and one commodity in short supply is fuel for heating homes.  The Land Defenders couldn’t care less.  If the ‘Settlers’ (the Left’s latest term for all non-indigenous people) freeze it serves them right.  For ‘colonizing’ people.

Just remember this the next time you hear a politician or government official say ‘it’s a complex situation’.  What they really mean is ‘I know what the right thing is but it’s not politically advantageous so I don’t want to do it’.

I’m just glad I don’t live in the City of Reconciliation anymore. 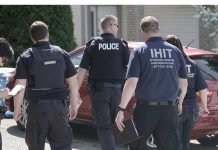 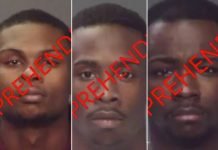 Three charged in killing of Bronx father shot while walking with... 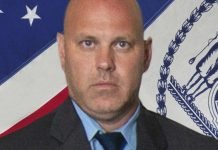 ‘An insult to all Canadians:’ Committee report on rural crime lacking