A gangster who shot to death his prominent Hells Angel pal after an all-night, drug fuelled party in 2016 has been denied full parole. The Parole Board of Canada ruled recently that Jason Francis Wallace’s release from prison would leave the community at-risk because the bikers might retaliate for the fatal shooting of Bob Green in October 2016. (The Province) 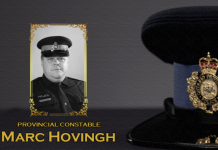 New York golf pro and his teacher girlfriend are killed in...