It is Christmas and I am filled with the joy of the season.  But only to a point.

On the day before Christmas Eve, a 19 year old Manitoba man was in court asking to have his remaining two years in custody changed from “closed” custody to “open” custody.  The change in status would allow the corrections system to release the man on unescorted releases for days, weeks or months.

The man is serving a six year jail sentence – the maximum allowed under the Youth Criminal Justice Act – for the inexplicable and brutal rape, murder and defilement of the body of his 79 year old grandmother. He was 14 at the time and is afforded all the protections of the YCJA.  Which of course means that he cannot be identified nor can his victim for fear that may identify him.  But more importantly, the police cannot warn the public as they can with an adult offender that Corrections Canada unleashes prematurely on the community. Despite the fact he is now an adult.

Now, lest you think this poor miscreant was “just a boy” and has learned the error of his wayward youth through the generous treatment he has received in the youth prison system and has thus earned the right for early unescorted absences from prison, uh, no.  That would not seem to be the case despite the protestations to the contrary of workers in the broken corrections system.

Elana Soloku who is the probation officer for the granny killer said, “I think he’s learned a great deal about managing his risks. Have they disappeared? No.”

I am ever so glad to learn that “he’s learned a great deal about managing his risks.”  But I am much more concerned that his probation officer acknowledges he is still a risk yet is backing the request for unescorted absences.

“He’s not just going through the motions (in jail). He’s actually going beyond expectations,” she concluded.

Really?  In prison he has been caught possessing explicit pornography that he downloaded while taking online educational courses provided by the corrections system.  Great education.

But clearly, he is not yet safe to foist upon an unsuspecting public who, because of our ridiculous laws, the police cannot even warn of his pending, dangerous presence.

The system cannot come to grips with the fact that some people are irretrievably  damaged and will never be well-adjusted contributing members of the community.  This man is one of them.

The judge in the case has yet to make a decision even though the decision seems clear enough to me.  But, even if this demented man is not given a change in status from closed to open containment, he will be released in two years.  I fear for his next victim.

After repeatedly sexually assaulting his grandmother after she died brutally at his hands, he spray-painted then stuffed her bleeding, naked body into a closet.  He may have been only 14 at the time, but this is one seriously broken human being.  And there is nothing that can fix that.

I wish I could tell you his name or talk about the life he snuffed out.  But I cannot. At the end of the day the system is being asked to give this man a chance to find another victim.  And I cannot understand a justice system that would even consider that. 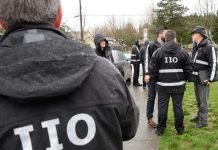